13 March, 2016. Having had a look into our cellar for suitable objects for the exercises to come I made a deceptively simple setup consisting of a glazed earthenware jug, some very old and incredibly heavy – and as I would soon find out, incredibly complex to paint – kitchen scales, and an egg in order to suggest that somebody might be starting to bake a cake or similar.
I moved the objects around and kept looking for interesting negative spaces. There was one position where I really liked the curvature of the space between jug and scales. It was similar looking both from the front and the back of the setup, but I wanted to keep the egg in front of the whole to serve as a believable third object and strong tonal contrast to the jug (Fig. 1a and 1b). 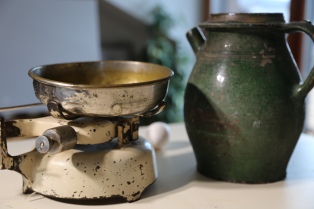 Figure 1b
Looking at the setup I realized that it might be an attractive idea to combine on one larger-sized canvas both studies required for this project. I would split it roughly in half, the left side (jug and egg) working on a dark ground, the right side (most of the scales) on a white ground. The exact position of the split I would negotiate while painting.
With the help of my viewfinder I decided that a landscape view would be a sensible choice in order to allow each technique enough space for comparison (Fig. 2a and 2b): 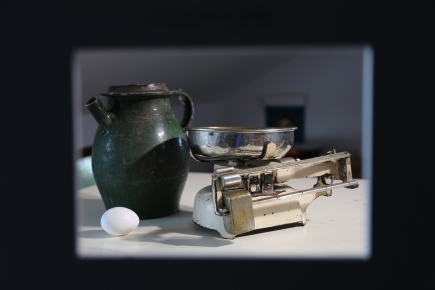 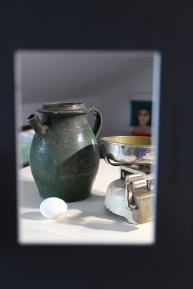 Figure 2b
In my sketchbook I prepared some dark ground using willow charcoal and made a sketch using both white and black charcoal as appropriate.

Referring to the study guide (OCA, 2011, p. 43) I had to look up the exact meaning of “low-key colours”. and found an introduction by Smith (2016). It then took me a while to settle on a suitable mix of colours with a light tone. It became a dark sort of orange mixed from primary magenta, gold ochre and sap green.
19 March, 2016. After having prepared the left half of my A2 painting carton with my own mix of Payne’s grey (ultramarine and black, the ultramarine requiring a staggering amount of black to make the mix look grey) and the right half with a layer of white, I loosely sketched in the objects with white and black charcoal. My intention was to use the hard transition between two methods of painting as a test to see whether I would succeed in making tonal values identical on both sides (Fig. 4).

The problems I encountered refer mostly – something I had not expected at all – to the painting on white ground. Although it took me a while to get accustomed to observing correctly and working out form with light tones on the dark ground, it was relatively easy to produce a believable setting. I was totally unsure, however, how to follow study guide instructions on the white ground. Although I have been painting using watercolous for nearly twenty years and I am well accustomed with using paper white for the highlights, I found it irritating to work on white ground (interpreting instructions as having to spare the white of the ground for the lightest parts of my objects) while also allowed to use white paint. In the end I had to follow my intuition and I am not unhappy with the result.
The most important lesson I learned in this exercise was the importance of making an informed decision which tone in a setting to elect mid tone. While in this respect the dark ground was comparatively easy to handle with only two colours to work with, there were many corrections required on the light ground until tonal values finally became believable.

At the moment I am hovering in mid air between making intuitive decisions based on the unproved experience gained in years of painting on my own and deducing principles from consciously observing effects required in a structured course like Painting 1. I can’t wait for the two to meet …