3 April 2016. Michel-Eugène Chevreul (1786-1889) was a multi-talented, ingenious chemist in 19th century France, who, after having been urged to investigate the reason for the apparent turning grey of high quality yarn used in the making of tapestries, devised a groundbreaking classification of colours, a chromatic circle (Fig. 1), to serve as first-ever standard for weavers and dyers. It was and still is being adapted and extended by many contributors (Costa, 2009).


The original trigger for his research had been one observation where the nature of blacks appeared to change when seen next to blues and violets in tapestries. After doing some research on that major problem Chevreul came to the ingenious conclusion that colours set next to each other mutually influence the perception of their respective nature. Chevreul described this main observation as the Law of Simultaneous Contrast of Colours, stating that “In the case where the eye sees at the same time two contiguous colours, they will appear as dissimilar as possible, both in their optical composition and in their strength of colour” (emphasis added by me). It was first published in an English language translation of his 1839 book, “The Principles of Harmony and Contrast of Colours and their Application to the Arts” (1855) (Roques, 2011, p. 4).
The above statement was interpreted by Chevreul as a tendency of the brain to enhance perception by exaggerating differences in lightness and hue, in particular along the common border (Roques, 2011, pp. 4-5, for the effect on lightness see top row in Fig. 2 below). The same works also for the bottom image in the same illustration. In the row of increasingly dark stripes the different borders to the left and right of each stripe will make them resemble “channelled grooves more than plane surfaces”. This effect is known as “Chevreul’s illusion”.
When the law is applied to hue, the following effects are observed: Placing side by side narrow strips of different tones of the same colour or strips of the same tone in different colours influences both the perception of intensity (contrast of tone) and optical composition (contrast of colour) of each colour, hence the name “simultaneous contrast of colours” (Roques, 2011, p. 6).
The basis of the perceived modifications depend upon the concept of complementary colours first observed by Buffon in 1743 (e.g. after staring at a red dot  for some time, it will appear green when moving the eye to a white sheet, Roques, 2011, p. 7) and observations by Hassenfratz regarding coloured shadows created by the simultaneous use of two different light sources (Roques, 2011, p. 7). Chevreul considered, in line with his observation for lightness, that complementary colours are those which are the most opposed. Exaggerating differences in this context means that the brain will add to each of the juxtaposed colours a little of the colour complementary to each. A white pattern on coloured grounds will thus appear tinted with the colour complementary to that of the ground. Adding some of the background colour to the pattern influenced by the complementary colour will neutralize the effect. And, importantly, juxtaposing complementary colours has the effect of enhancing each other, since to each is added some of itself (Roques, 2011, pp. 8-9).While the basic physical mechanisms of colour perception are not disputed and Chevreul’s explanations are supported by findings in neuroscience, there exist several conflicting theories regarding the mutual influence of colours and their effect on the perception of colour in art (Roques, 2011, p. 9), while a main point of criticism is that according to modern standards Chevreul confused additive and subtractive mixing, the former referring to mixing light, the latter to pigments and which are incompatible (Roques, 2011, p. 10). It is also important to remember that the observed effects depend on the size (area) of the coloured samples. In cased the samples are very narrow, the colours will “fuse” to be perceived as an average between the two juxtaposed colours (Roques, 2011, p. 11).

Chevreul’s work, increasingly so as he moved from pure to applied science, was of immense interest for whoever used colour at the time. Since, however, many workers of the time became acquainted with Chevreul’s theories in a second-hand fashion there were some misunderstandings transported regarding their true nature and some artists adopted a style of painting based on misinterpretations (Roques, 2011, pp. 12-13). Interestingly it was mostly artisans, and not painters, who appreciated Chevreul’s findings when solving practical problems. Painters were only interested in the enhancing effect of juxtaposing complementary colours and tended to ignore the unwanted effects in other colour pairs. Among the painters interested in Chevreul’s findings was Eugène Delacroix (1798-1863, France) (Fig. 3). The example below is a good example of applying complementary colours, see especially the flags on the ground (Roques, 2011, p. 16):

Despite contrasting opinions it is obvious that many painters deliberately applied their knowledge regarding the use complementary colours, e.g. Impressionist Claude Monet (1840-1926) or Impressionist and Neo-Impressionist Camille Pissarro (1830-1903) in the following painting, where the juxtaposed greens and reds assume a great brilliance. He even went as far as taking in Chevreul’s advice to pay attention to the effect the colour of the frame has on a painting.

During Neo- and Post-Impressionism painters became increasingly interested in the organisation of colours on the canvas. Among these, Neo-Impressionist and theoretician Paul Signac (1863-1935) and Georges Seurat (1859-1891) were most avid in their application of Chevreul’s colour theory, especially when “optically mixing” by placing small dots of complementary colours next to each other. According to Roque (p. 18) there was another misunderstanding at the base of their idea: rather than enhancing the respective complementary colour, the effect would be one of averaging them out, since they did not take into account Chevreul’s warning of not confusing contrast and mixing, the presence of which depends on the size of the sample of colour. The luminosity remains in their paintings, because the dots are big enough for optical mixing NOT to work (Roque, p. 19).

Vincent van Gogh (1853-1890) was another painter with a keen interest in colour theory. Since he had a great liking for yellow, many of his paintings have juxtaposed a large proportion of the complementary colour, violet, e.g.: 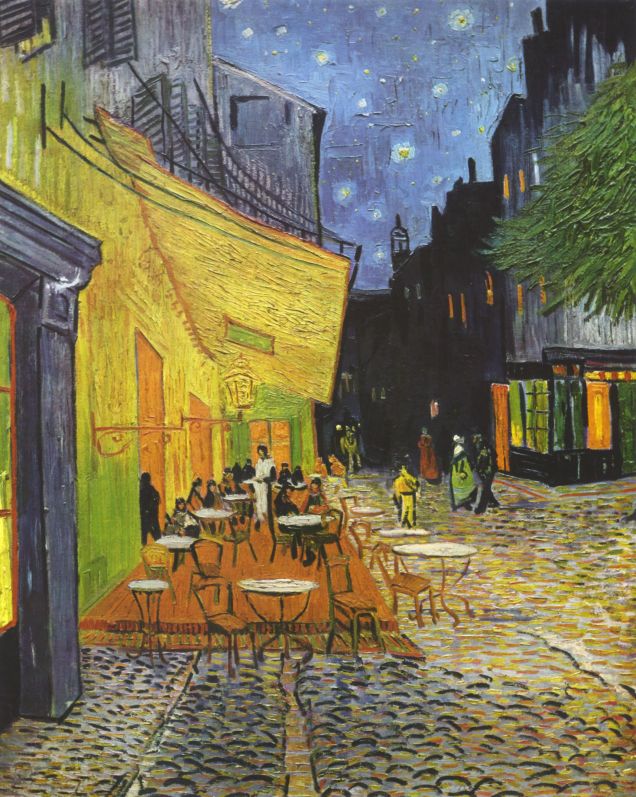 Roque, on p. 21, discusses also van Gogh’s description of the ideas behind the famous painting of his bedroom, on the base of which was an interest in transporting an impression of rest by the selective use of colour. To this end van Gogh used both the contrasts of complementary colours AND the same hues in different states.

Chevreul’s ideas continued to be of interest with the beginning of abstract art. Since the latter artists has a particular interest in the organisation of colour on the canvas, his theory helped them organise their ideas. Foremost among these was Robert Delaunay (1885-1941), who used it to systematically structure his abstract paintings. His intention was to capture colour vibration and transport it to the eye of the viewer by applying a phenomenon which Chevreul called “mixed contrast”: Seeing one colour, followed by the illusion of its complementary, superimposed on the colour of another object introduced at a later point in time.

Despite an increasing tendency to challenge and replace Chevreul’s ideas with newer findings, they are still in use as a basis of teaching colour theory today (Roque, p. 24).